Once again members gathered on the Clout range for a friendly competition – this time in the form of a metric clout over 165m, 125m and 100m. Despite range limitations permitting only Longbows and Barebows taking part, a significant number of the clubs archers entered the competition under clear skies and sweltering heat.

There was very little wind to provide any relief – although some claimed that their arrow trajectories were affected by what must have been strong ‘upper level’ breezes…. The writer believes that this is a characteristic of what is commonly termed “The Archers Excuse”, rather than any genuine meteorological phenomenon present at the time!

Unfortunately the heat caused one casualty as Jan succumbed, but has since made a full recovery after rest and fluid replenishment in the shade.

Special prizes were awarded to most arrows nearest the flags, and went to Geoff Langley & Pete Dobson

All participants stated how much they enjoyed the event and although the heat was somewhat oppressive it was a relief from the recent spell of rain and cold weather. Thanks go to Richard and Jan for the organisation.

Next up our annual Animal Shoot and Pigeon Eliminator along with the summer barbecue (bring your own food to cook) on Saturday 27th July.

On the way to the Clout 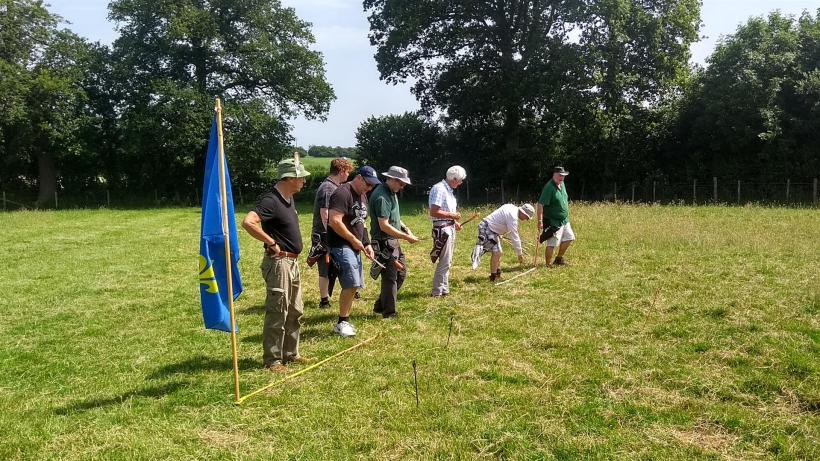 Counting them in at 165m